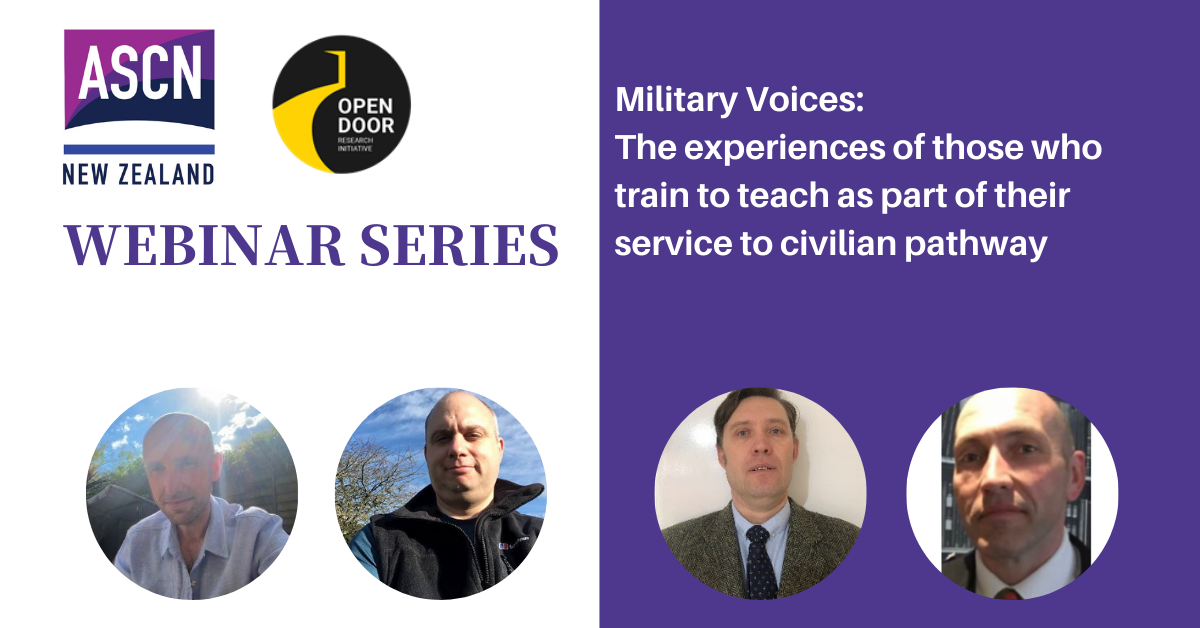 You are invited to join ASCN (New Zealand) for the next Webinar in the series where we continue our discussions on the “Role of Education in enhancing Wellbeing and Life Outcomes for Military Service Members, Veterans and their Families” with a presentation from England.

“Military Voices: The experiences of those who train to teach as part of their service to civilian pathway.”

In this presentation Mr David Mather, Mr Leigh Pickard-Morrish, Mr Kevin Lloyd and Mr Bruce Morrison will share from their work, research and lived experience on the transformative role of Teacher Training and Higher Education as part of their military to civilian transition.

They will also focus upon transitions and identity in terms of the work that is being done at the University of Portsmouth’s Further Forces Programme including. This includes cultivating and fostering in service personnel and veterans a sense of collaborative spirit upon which the teaching profession is built.

There will be a one hour presentation followed by a one hour interactive Q&A session that will allow participants to ask the presenters questions about points raised in the presentation or current issues on transition related to their work.

David Mather is the academic lead for the Further Forces Programme – an initiative that trains service leavers to teach in the context of Science, Engineering and Technology within the FE and 6th Form sectors at the University of Portsmouth. He also contributes to the PGCE in Further Education & Training, MSc in Education Leadership & Management and the FdA in Learning Support programs.

Prior to this, David spent over a decade in teaching and leadership roles in Further Education sector, fulfilling roles that included the delivery of A-levels in Sociology, Politics and History, BTEC (Vocational) qualifications in Public Services, ‘Access’ qualifications (gateway courses for adults seeking to attend HEIs) and teacher training programmes delivered at level 5, 6 and 7. Before that, David worked as a Training Consultant in the commercial finance sector.

David is currently working on his EdD; the (provisional) title of his thesis is ‘’Military Voices’: The experiences of those who train to teach as part of their service to civilian pathway’. He has also recently carried unobtrusive research regarding the way in which military and education discourses represent teaching and initial teacher training.

Leigh Pickard-Morrish joined the Royal Navy in 1996 and subsequently volunteered to transfer to the Submarine Service in 1997.

He had 24 years of service with appointments on Trafalgar, Swiftsure and Vanguard classes of submarine with a career in Data Analytics as a Tactical Warfare Specialist. Following successful career development and training and the completion of a Leadership and Management degree appointments in learning development and coaching roles he began to focus on a new career in teaching within the Further Education sector.

Through resettlement and career transition Leigh had a successful enrolment onto the Further Forces programme and this has since resulted in a new exciting and rewarding career in teaching. His employment since leaving the Royal Navy includes lecturing at Exeter College delivering the Level 4 Data Analytics apprenticeship and both the Level 3 and 5 Leadership and Management curriculums.

Inspired by own successes and teaching experiences and a newly focused aspiration to teach, coach and mentor new teachers has led Leigh to employment at Babcock Marine delivering the L3 teaching curriculum and mentoring Level 4 and Level 5 curriculums for Defence Trainers.

Keith Lloyd served for 25 years in the Royal Engineers attaining the rank of WO1. He is now preparing to leave the Army and his focus for his future career is in teaching, in particular in his area of passion mathematics.

He feels the teaching of mathematics in a Further Education capacity and its practical application across the engineering spectrum is a key part of today’s teaching. The application of mathematics was a fundamental part of his role as an electrician in the Army and it has underpinned his entire career as a military engineer.

A significant proportion of his time in the Army has been spent in a training role. This included a posting as a trainer responsible for teaching military engineering where he achieved a BTEC level 4 Certificate to Teach in The Life Long Learning Sector. At this point an interest in pursuing a career in teaching after leaving the Army became clear. A further posting, focussed on teaching Explosive Ordnance Disposal (EOD), cemented the ambition to become a mathematics teacher. During his final posting, Quality Assurance of lesson delivery and the facilitation of Continuous Professional Development to all trainers were the main focus.

On promotion to Sergeant, he was posted to 14th Signal Regiment (Electronic Warfare), where he enjoyed commanding a Light Electronic Warfare Team in Afghanistan and then moved as a Troop Sergeant to 2nd Signal Regiment. After gaining promotion to Staff Sergeant in 2008 he took up post as the Senior Multiple Commander in Afghanistan and then was posted to 4 (Military Training) Squadron in depot. Where he enjoyed instructing on the Senior Command, Leadership and Management courses.

Bruce gained a Commission in 2017 in the rank of Captain and was employed as a Training Officer, Career Manager and Quartermaster. He successfully designed and implemented the HR teaching criteria for the whole Army’s Leadership courses and is transitioning after 26 years of service.

This series of real time education and information sharing webinars has been developed by ASCN an Australian and New Zealand Not For Profit organisation in collaboration with its partners in the each of the 5 Eyes Countries (Australia, New Zealand, Canada, the United States and the United Kingdom).

In 2021 Open Door: Veteran Transition Integration Wellbeing Research Centre at Flinders University is partnering with ASCN to develop and present the webinar series.

The Webinars in the series are being presented by International Thought Leaders and Researchers from each of the 5 Eyes Countries and Robert Lippiatt from ASCN is the chair of the series.  Robert has had significant international experience chairing and facilitating Defence and Veterans Forums.

Each Webinar is intended to share key issues and insights on Military Veteran Transition and post service life gained through research and other ongoing work with military members, veterans and their families in the relevant country and to stimulate ongoing conversations and collaborations.

Watch out for information and registration instructions for further Webinars in the series in 2021.

If you require any additional information on these Webinars or would like to register your interest in participating in the rest of the Webinar series please contact Steve Shamy at the ASCN Secretariat at email ascn.nz@gmail.com.

Open Door is an Australasian multi-disciplinary research and diffusion hub based at Flinders University that exists to undertake and disseminate research information to academics, practitioners and veterans interested in research and to contribute to evidence informed discussions on policy and service design and delivery to veterans. first responders and their families.

Open Door‘s approach is based on the view that the best source of evidence on veteran issues are veterans. The Centre uses a co-design approach that draws upon the lived experiences of veterans and their families.

The Open Door team is made up of veteran researchers and policy experts drawn from a number of Universities across Australia and New Zealand. Its aim is to bring together the best minds and thinkers to conduct applied and blue-sky research that demonstrates what works for veterans in transition and across the life course.

Like ASCN. Open Door is committed to contributing to enhancing the Wellbeing of veterans. first responders and their families.