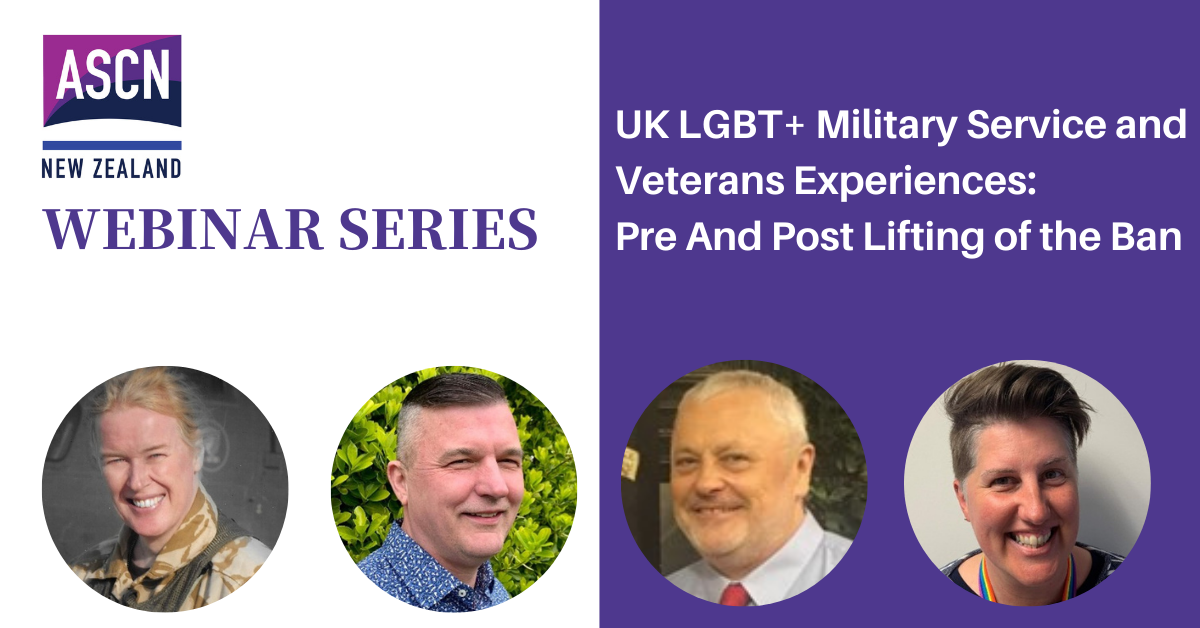 Webinar Series – Pre And Post Lifting of the Ban

You are invited to join ASCN (New Zealand) for another Webinar in the Series on LGBTIQ Military Service Members and Veterans.  In this Webinar we continue our discussion on this population by considering the topic of:

In this Webinar Flt Lt Caroline Paige, Lt Commander Craig Jones MBE the Joint CEO’s of Fighting With Pride, Lt Commander Patrick Lyster-Todd the Chair of Fighting With Pride and Cpl Kate Green Director of the RBL Partnership will share their insights on the lived experiences and issues facing LGBTIQ Military Service Members and Veterans in the UK.

Australia 7.00 am Sydney, Melbourne, Canberra and 6.00 am Brisbane

There will be a one hour presentation followed by a one hour interactive Q&A session that will allow participants to ask Flt Lt Paige, Lt Commander Jones MBE, Lt Commander Lyster-Todd and Cpl Green questions about points raised in the presentation or current issues on transition related to their work. 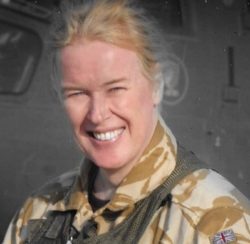 Caroline Paige is Joint Chief Executive of Fighting With Pride.  She joined the Royal Air Force in January 1980, serving 35 years as a navigator on fast jets and battlefield helicopters.  In February 1999 she became the first openly serving transgender officer in the British Armed Forces.

Caroline flew air defence fighters, providing air defence of the UK and Falkland Islands during the Cold War, and deployed as a Tactical Air Operations Officer during the build up to Gulf War 1.  In 1992 she volunteered for trooping helicopters, seeing service in Bosnia with the UN in 1995, and in Northern Ireland.

Her gender transition raised demands for her immediate dismissal, as ‘a liability and danger to personnel on operations’, but Caroline met all challenges, becoming a highly respected tactics specialist and receiving several commendations for exceptional service in Iraq and Afghanistan.  In 2011 she received a PUS MOD award for her trailblazing service and dedication to evolving tri-service transgender inclusion policy and support.

After retiring from the RAF Caroline formed her own company, teaching tactics skills to European Defence Agency military helicopter crews, and as an inspirational speaker, speaking to businesses, corporations, charities, universities, and schools.  She also writes articles and blogs and has participated in over 35 TV and radio interviews.

Caroline is a Patron of Liverpool City Region Pride Foundation, a Stonewall School Role Model, and volunteers with Schools OUT UK’s ‘Outing the Past’ team, delivering a national LGBT History Month festival.  Her autobiography True Colours was published in 2017 and she is a co-author of the military LGBT+ anthology Fighting With Pride. 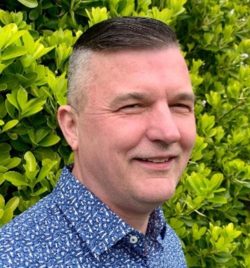 Craig Jones is Joint Chief Executive of Fighting With Pride.  He joined the Royal Navy in 1989 and in a busy operational career, deployed to the border counties of Northern Ireland during ’the troubles’ and in 1993 led helicopter fast rope teams in the Northern Arabian Gulf, clearing the waterways leading to Baghdad.

Craig was deputy navigator of the aircraft carrier HMS Invincible during Operation Bolton and upon his return to the UK completed the Principal Warfare Officer Course, which led to a number of intelligence appointments.

On the day of the lifting of the ‘gay ban’, Craig came out and led challenging work to restore the Armed Forces Covenant for the serving LGBT+ community.

Craig was appointed a Member of the Order of the British Empire in 2006 for services to equality and human rights in the Armed Forces.  After leaving the Royal Navy in 2008, Craig became the Head of Diversity for Barclays Bank before creating multi award winning NHS mental healthcare provider Brighton and Sussex Care in 2010. Craig was also a board member at Brighton and Sussex University Hospitals NHS Trust, a board member of the national charity Business Disability Forum and a member of OFCOM’s Broadcast Training and Equity Regulator.

Craig was the editor of the charity anthology Fighting With Pride. In addition to his role at FWP, Craig is a current member of the MOD Veterans Advisory and Pensions Committee and a Board Member and Trustee of Southdown, the specialist housing and care provider.

Patrick Lyster-Todd is the Chair of Fighting With Pride.  He joined the Royal Navy in 1972, serving for 20 years as a professional seaman officer before resigning to look after his dying partner.  He served on active service in Northern Ireland, subsequently as a Principle Warfare Officer – including as the duty Operations Officer at Faslane during the Lockerbie tragedy and latterly as the head of the tertiary stage of Junior Officers’ training.

Patrick subsequently played a lead role in the campaign to lift the ban on LGBT+ people serving in the military, initially as Chair of Rank Outsiders.  His first paid job after leaving the Navy was as the Terrence Higgins Trust’s first Health Promotion Officer for HIV positive people.  He has also worked as a restaurateur, as manager of several gay bars, in television at a senior level, as Peter Tatchell’s General Manager and more latterly with Veterans charities, particularly in the field of homelessness and housing.

Currently he is head of communications and fundraising for the UK’s main Veterans housing charity.  He has continued his voluntary work, as a director and then Vice-Chair of GMFA for 6 years, Director of Community Engagement for Pride in London for 5 years and today as a member of several local boards and committees including Merton Healthwatch, Merton LGBT+ Forum and the London NHS Armed Forces Network.

In addition to his role at FWP, Patrick is a member of the MOD Veterans Advisory and Pensions Committee 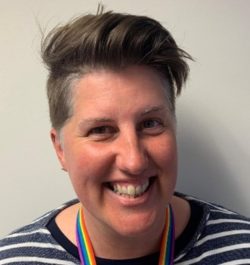 Kate Green is the Director of the RBL Partnership.  She served with the Royal Military Police in the 1990’s.

Whilst serving in Germany she was approached by a senior Officer who told her (in a busy HQ corridor) that he had heard rumours about her sexuality and she therefore had a choice to make – live her life or be a soldier, as she couldn’t be both. This confrontation turned Kate’s life upside down and she made the decision to leave the Army in 1999. Only weeks later, the ban on ‘homosexuals’ serving in the Armed Forces’ was lifted.

Desperate to maintain a link to the military, Kate started working for the Royal British Legion in 2001 where she is currently the Overseas Area Manager.  She is passionate about ensuring all serving personnel and Veterans get the advice and support they need, wherever in the world they might be.

Kate has helped the Legion shape its values and behaviours to reflect the LGBT community, becoming a Stonewall Leadership Champion in 2018.  She continues to strive to raise awareness of the issues facing LGBT Veterans and their families, particularly those serving prior to 2000.  Kate lives in rural Cambridgeshire with her wife Michelle and their 4 dogs.

This series of real time education and information sharing webinars has been developed by ASCN a Not For Profit organisation in collaboration with its partners in the each of the 5 Eyes Countries (Australia, New Zealand, Canada, the United States and the United Kingdom).

The Webinars in the Transition series are being presented by International Thought Leaders and Researchers from each of the 5 Eyes Countries and Robert Lippiatt from ASCN is chairing the Webinar series. Robert has had significant international experience chairing and facilitating Defence and Veterans Forums

Each Webinar will cover the key issues and insights on Military Veteran Transition and post service life gained through research and other ongoing work with military members, veterans and their families in the relevant country.

If you require any additional information on these Webinars or would like to register your interest in participating in the rest of the Webinar series please contact Steve Shamy at the ASCN (New Zealand) Secretariat at email ascn.nz@gmail.com.