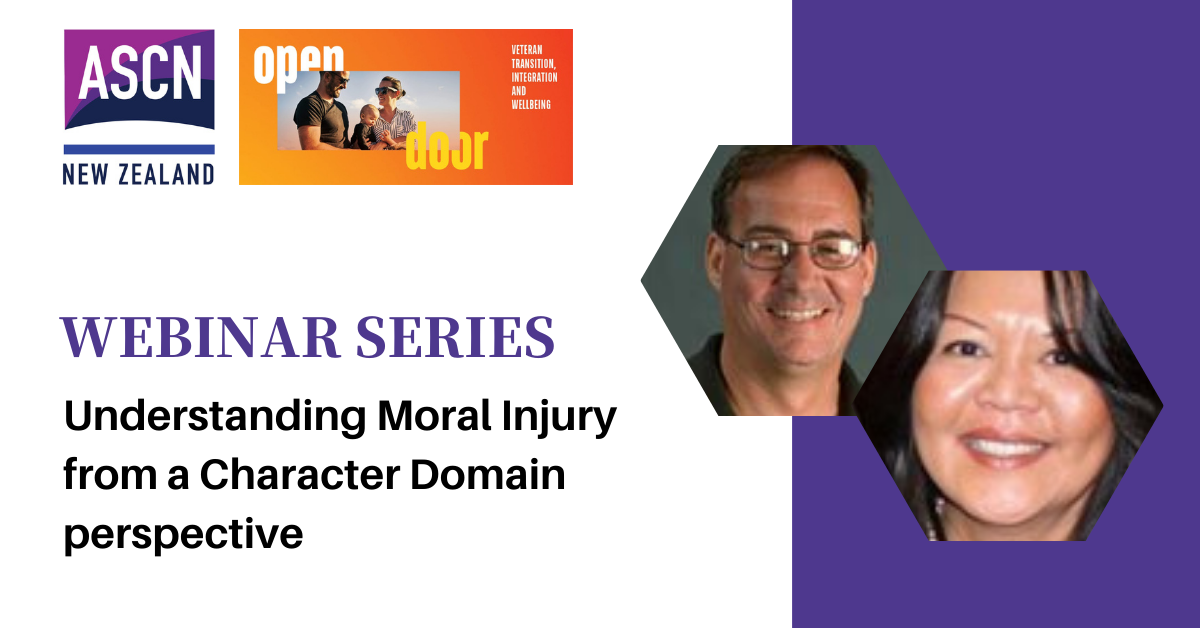 You are invited to join ASCN (New Zealand) for the next Webinar in the series as they continue their discussions on the issue of Moral Injury and Identity and its impact on the Wellbeing Outcomes of Military, Veterans, Public Safety Officers and Families

In this presentation Dr Carl Castro and Dr Hazel Atuel from the University of Southern California will introduce (1) a character dimension of moral injury and (2) a dual pathway model of moral injury reflecting the clinical and character domains. This framework advances a broader theoretical foundation of moral injury that has wider applicability to the varieties of human experience, and is not defined by and does not necessarily reflect clinical impairments.

There will be a one hour presentation followed by a one hour interactive Q&A session that will allow participants to ask the presenters questions about points raised in the presentation or current issues on transition related to their work.

To participate in this Webinar with Dr Castro and Dr Atuel Register at:

Dr. Carl Castro is currently Professor and Director of the Military and Veteran Programs at the Suzanne Dworak-Peck School of Social Work at the University of Southern California. Dr. Castro is one of the leading military health theorists in the world today.

Dr. Castro received his Ph.D. from the University of Colorado in 1989. He began his military career as an infantryman in 1981, and completed two tours in Iraq, as well as serving on peacekeeping missions to Saudi Arabia, Bosnia and Kosovo.

He conducted the first-ever behavioural health assessment of service members while they were still conducting active combat operations, setting a new standard of care for service members during combat.

He retired from the Army at the rank of colonel.

Dr. Castro is currently Chair of a NATO research group on Military Veteran Transitions, a Fulbright Scholar and member of several Department of Defense and Veteran Affairs advisory boards.

His current research efforts are broad, including understanding and ameliorating the effects of military trauma and stress on service members, family, and unit readiness, the prevention of suicides and sexual assaults, and evaluating the process of transition into the military, as well as from military service back to civilian life.

Dr. Hazel Atuel is a Research Associate Professor at the University of Southern California’s Center for Innovation and Research on Veterans & Military Families (CIR).

As a social psychologist, Dr Atuel’ s basic research interests include identity and self-concept, intergroup relations especially majority-minority group dynamics, as well as stereotyping, prejudice and discrimination. At CIR, her applied research interests include veteran identity and its correlates (e.g., transition), moral injury, as well as military and veteran radicalization.

Currently, Dr Atuel is leading a 3-year National Insitute of Justice study that examines the social networks (e.g., civilian, military) of military veterans who engaged in homegrown violent extremism (HVE), with the goal of developing a HVE risk assessment tool for adoption among military and civilian agencies.

This series of real time education and information sharing webinars has been developed by ASCN an Australian and New Zealand Not For Profit organisation in collaboration with its partners in the each of the 5 Eyes Countries (Australia, New Zealand, Canada, the United States and the United Kingdom).

In 2021 Open Door: Veteran Transition Integration Wellbeing Research Centre at Flinders University is partnering with ASCN to develop and present the webinar series.

The Webinars in the series are being presented by International Thought Leaders and Researchers from each of the 5 Eyes Countries and Robert Lippiatt from ASCN is the chair of the series.  Robert has had significant international experience chairing and facilitating Defence and Veterans Forums.

Each Webinar is intended to share key issues and insights on Military Veteran Transition and post service life gained through research and other ongoing work with military members, veterans and their families in the relevant country and to stimulate ongoing conversations and collaborations.

Watch out for information and registration instructions for further Webinars in the series in 2021.

If you require any additional information on these Webinars or would like to register your interest in participating in the rest of the Webinar series please contact Steve Shamy at the ASCN Secretariat at email ascn.nz@gmail.com.

Open Door is an Australasian multi-disciplinary research and diffusion hub based at Flinders University that exists to undertake and disseminate research information to academics, practitioners and veterans interested in research and to contribute to evidence informed discussions on policy and service design and delivery to veterans. first responders and their families.

Open Door‘s approach is based on the view that the best source of evidence on veteran issues are veterans. The Centre uses a co-design approach that draws upon the lived experiences of veterans and their families.

The Open Door team is made up of veteran researchers and policy experts drawn from a number of Universities across Australia and New Zealand. Its aim is to bring together the best minds and thinkers to conduct applied and blue-sky research that demonstrates what works for veterans in transition and across the life course.

Like ASCN. Open Door is committed to contributing to enhancing the Wellbeing of veterans. first responders and their families.